Not every city bicycle lane project is welcomed by motorists, but the bike lanes going in on Cleveland this month have led to an unexpected bonus for drivers.

The long-anticipated repaving project has reconfigured the Midtown street to include buffered bike lanes, but it’s also made room for left vehicular turning lanes at stoplights at the street’s major intersections.

For years, drivers wanting to turn left from Cleveland onto Poplar, Jefferson, Madison, or Union had to do so in a parking lot or side street since left turns at those intersections were not allowed. But since the city is adding bicycle lanes up and down Cleveland, they’ve also been able to create a left turning lane. 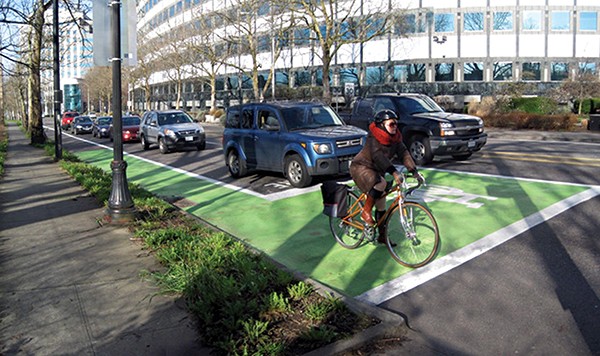 Portland, Oregon, will be painted at the intersection of Cleveland and Peabody.

“One of the added benefits of the redesign is the fact that there is now a left turning lane continuously along Cleveland,” said Kyle Wagenschutz, the city’s bicycle and pedestrian program manager. “When I was driving down Cleveland [one day last week], there were no fewer than eight cars waiting to turn left on Union. That wouldn’t have been possible a few weeks ago.”

The bike lanes going in on Cleveland — from Overton Park Avenue to Lamar — are still a work in progress, but when the repaving and striping project wraps up in a few weeks, those lanes will be completely protected from traffic along most of the street.

A buffer lane with white metal poles will separate car traffic from bicycle traffic, a configuration that hasn’t been possible with many of the city’s bicycle lane projects.

“The buffer zone will continue at least to Peabody. There’s a little section of Cleveland where the traffic circles are, and there was no room for a bike lane there,” Wagenschutz said. “On those couple of blocks, you have to share the road. But the buffers will resume at Harbert down to Lamar.”

The city will also be getting its first “bike box” on Cleveland at the Peabody intersection. A bike box is a large painted box on the street that allows cyclists to position themselves in front of cars lined up at a traffic light. Cars have to stop outside the bike box — about 10 feet back from where they normally would stop at an intersection — and let cyclists go first.

“It allows us to bring the bikes all the way to the intersection, and then the bicycles will cue up in front of the cars before proceeding through the intersection,” Wagenschutz said. “It will be the first bike box in Memphis and only the second in Tennessee. Nashville put one in earlier this year.”

For now, the bicycle lanes will only extend as far north as Overton Park Avenue, but Wagenschutz said, once Crosstown Concourse construction is done, they’ll add lanes (most of which will be buffered) all the way down North Watkins to Frayser.

“There was a conscious decision to stop the repaving at Overton Park Avenue so we wouldn’t have a lot of heavy trucks rolling over it headed to the Crosstown site,” Wagenschutz said.

“Ever since we started Crosstown Arts in 2010, we’ve known that we’re not just renovating a building; we’re building community. Having a neighborhood where people feel safe biking is critical to that broader mission,” Richardson said.

Richardson points to plans that will make Crosstown Concourse as bike-friendly as possible.

“Current development plans also include extending the V&E Greenline across North Parkway onto the Concourse site, as well as providing secure bike storage, changing rooms, and repair stations inside the building,” he said.