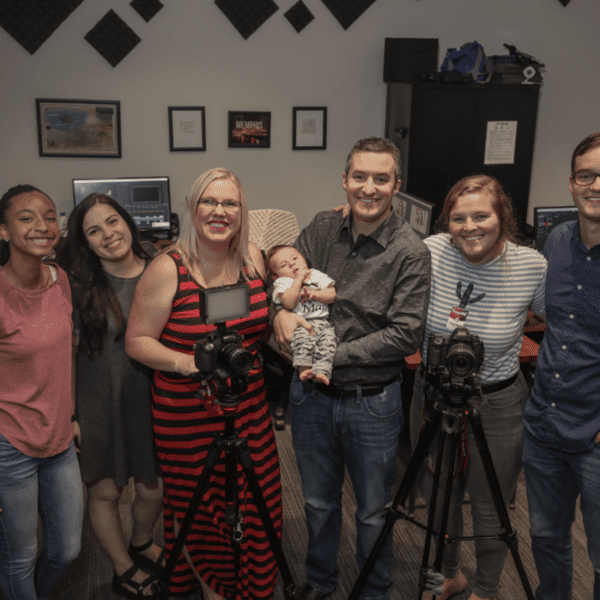 As a television news reporter, Ready spent her days chasing stories about robberies, shootings, and other tragic events, and more often than not, after the stories aired, she rarely had a chance to follow-up with victims’ families.

“It was frustrating to feel like there was no way for you to be part of the solution,” says Ready, who has since left the news business. Her last TV news job was with WMC-TV in Memphis. “It wears on your soul. It’s hard to stop and look around and see the positive when all you’re covering is the negative.”

It was those feelings that eventually led Ready to leave the business and launch Forever Ready Productions LLC, a video production company that works primarily with nonprofits, start-ups, and small businesses. Forever Ready operates out of The Control Room — a video and podcast studio in the Central Atrium of Crosstown Concourse. They share that space with the OAM Network, an independent podcast network.

“We specialize in turning fast-paced content for use online. Most of our work is done on an average turn-around of one to two weeks. And we do it at an affordable rate so the client can keep coming back and building their video libraries,” explains Ready.

Ready and her team of five — client manager, video producer, videographer, graphics producer, and accountant (a role staffed by her husband Scott Ready) — have produced videos for Explore Bike Share, the Memphis Zoo, the Dorothy Day House of Hospitality, Just City, and many more.

The Control Room studio falls under the Church Health umbrella, so both Forever Ready and OAM create content for Church Health as a trade for their use of the studio space.

“Early on, Church Health contacted us because they had this space and wanted to do some video, but that wasn’t their specialty. They wanted someone to tell their stories and activate this space. It’s a great way for us to grow and for them to be able to share their stories on a video platform,” Ready says.

Ready got the news bug in high school when she worked on her school’s television news program. She moved on to work as a production assistant at an ABC affiliate in her hometown of Cedar Rapids, Iowa. She eventually began anchoring sports and continued that while she attended Loras College in Dubuque, Iowa, where she majored in media studies. But in her last semester of school, she decided to switch to covering news.

Ready says she’d often show up to cover a breaking news event, and she and other reporters would end the story by telling the audience they’d keep them updated as they learned more.

“But we never really learned more because there were so many tragic stories to cover. It was frustrating,” she says.

Now, with Forever Ready, Ready has been able to get some resolution on at least one of those tragic stories from her reporting days.

“In 2013, I covered a shooting of a pizza delivery guy who was robbed and shot. He ended up at Regional One,” Ready explains. “Fast-forward to shortly after I started Forever Ready Productions: One of my first big clients was Regional One, and the first story we did for them was filming a surprise meeting between a doctor and a former patient. Turns out that patient was the pizza delivery guy who’d been shot.”

Through Forever Ready Productions, Ready not only produces video content for clients, she also gives back to the greater Memphis community through a pro bono video series called Contagious Giving. Once a month, they either film a video for an organization that can’t afford to pay or they choose an uplifting local story they’d like to tell. Ready says she started the series so she’d get an opportunity to tell positive stories that she couldn’t tell on the news.

“At the end of the day, it’s about people. Empowering people who are watching and empowering the people featured in the stories,” Ready says. “Through video, people get to share what they do in a way that others may have never heard before.”

Interested in contacting Forever Ready Productions LLC with your own story? Email tellyourstory@foreverreadyllc.com.