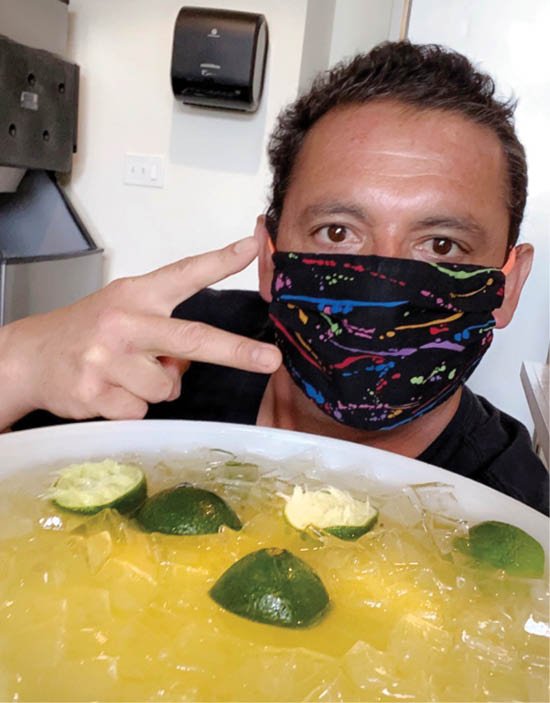 We might be under quarantine for a little longer, but the Crosstown Concourse’s food hall provides a little taste of the world beyond our borders. Global Café at Crosstown Concourse takes an international approach to cuisine, offering a variety of dishes from several countries. And the best part? The restaurant has immigrants from each of those countries running their own kitchens and sharing traditional and innovative recipes. It might have been tough to predict how the Global Café experiment would turn out when the restaurant opened its doors in 2018, but two years on, its unique social enterprise model has seen the restaurant thrive, even through times of adversity.

Global Café is the brainchild of owner and Swiss immigrant Sabine Langer, who came up with the concept when volunteering with refugees and immigrants in Binghampton. There, she found chefs with immense talent but little restaurant experience. She parlayed that idea into the food hall now known as Global Café. But she made her first Global Café connection all the way back in 2012 while on a 20-mile run in California. There, she fell into a pace group with Juan Viramontes. The two stayed in touch, and when she called him about an opportunity for a new restaurant, he immediately relocated to Memphis.

“We want to be able to share our culture and open doors for us where we can. In turn, we can integrate into the community better and understand the customers better; in the end, we can be better members of our community as well.”

Born and raised in Mexico, Viramontes moved to California at a young age. His first taste of the dining industry came when he was just 10 years old, cleaning up after a food truck that set up shop near a popular soccer park in his neighborhood. Since then, he studied culinary arts in college and has worked every restaurant position imaginable.

Now, as general manager of Global Café, he wants the restaurant to provide a platform for other immigrants and refugees to hone their craft. “We are a social enterprise that works with immigrants and refugees,” he says. “Our philosophy is to have folks from all over the world who are hardworking people who have incredible amounts of cultural enrichment to offer via their recipes.”

Such a platform is crucial, according to Viramontes, as many refugees find it difficult to adapt when arriving in the United States. “There are many people who come here and end up with tough jobs that don’t leave them time to learn the culture and study the language,” he says. And with so many politicians taking a negative stance on immigration, he views Global Café as a way to bridge that gap. “We want to be able to share our culture and open doors for us where we can. In turn, we can integrate into the community better and understand the customers better; in the end, we can be better members of our community as well.”

One of the most foolproof ways to join people together is through food, and Global Café embraces that notion with a strong menu. The restaurant currently features three separate stations, each run by immigrants: Chef Fayha, from Syria; Chef Ibti, from Sudan; and Chef Maria, from Venezuela. Each station offers numerous appetizers and entrées from each country, featuring everything from empanadas to chicken shawarma, and you won’t find a weak link among them. 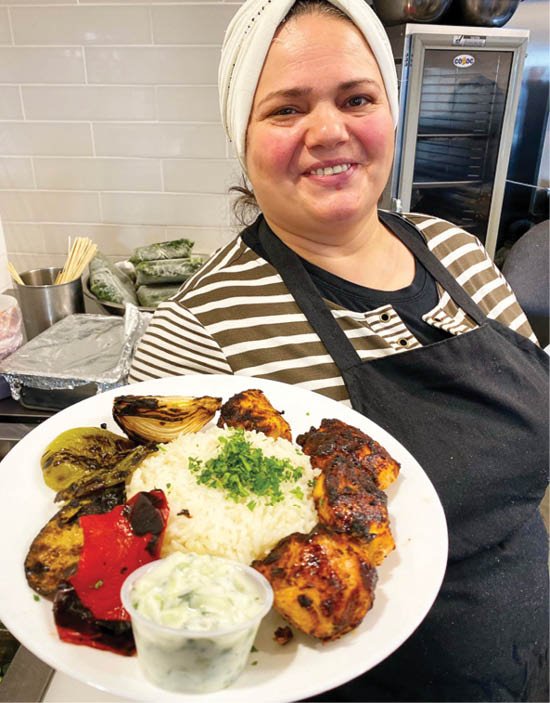 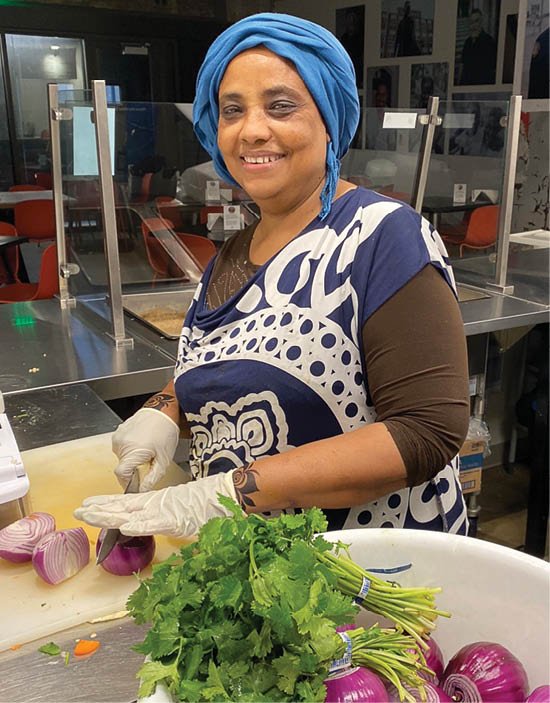 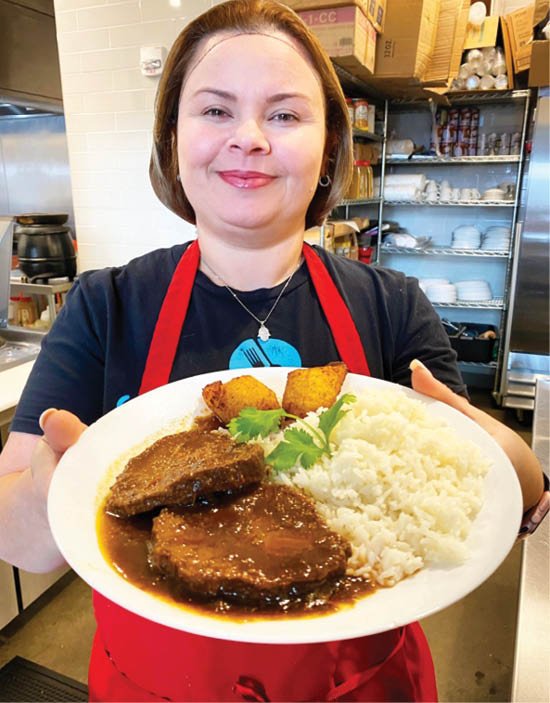 “There’s nothing I would ponder switching off this menu,” says Viramontes. “We were careful to select each item we included so that we would have variety, but the stuff we put there is strong.”

Beyond the main menu, the chefs are always looking for new things to add. Ibti recently created her own Sudanese spin on fried chicken, while Viramontes introduced tacos around Cinco de Mayo. “I think it’s a good idea to every once in a while create a new special,” he says. “We’ll keep all the old favorites, but when someone goes full circle on the menu, it’s good to have something to keep up the interest.” When Cinco rolled around, the tacos sold out immediately. Any new specials will stay on the menu until they stop selling.

In addition to managing Global Café, Viramontes also tends bar, where he whips up a select menu of cocktails. The kaleidoscopic drinks all burst with bright colors, and there’s something for everyone’s taste. For those wanting something familiar, there’s always Juan’s Margarita, of course, but other interesting concoctions to sip on include the Chocolate/Hazelnut Martini, which Viramontes describes as a “full-on dessert in a glass.”

While the COVID-19 pandemic put many restaurants into dire straits, Viramontes cites Langer’s proactivity as the key to the restaurant’s adaptation. She quickly set up web ordering service and created a delivery team for Global Café, which delivers for free within a four-mile radius of the restaurant. Customers can order any of the regular appetizers or entrees, or a few family-size portions of select dishes. Draft beer from Crosstown Concourse is also sometimes available for a steal at 99 cents a cup. 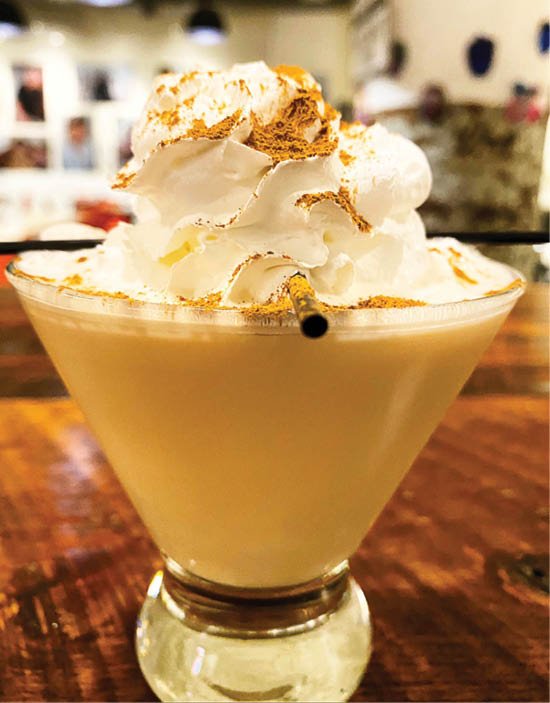 The chocolate/hazelnut martini, described as a “full-on dessert in a glass.”

But with Global Café’s new capacity for delivery, the restaurant did more than just stay open. Almost as soon as stay-at-home orders went into place, the team started promoting an option for customers to pay it forward by purchasing a meal for a medical professional or anyone economically impacted by the coronavirus.

“With our backgrounds as immigrants, there were times when things were tight, and even something so basic as food could be tough to get our hands on,” says Viramontes. “We had to endure a lot, so I think there’s a direct translation to people who are struggling now. Uncertainty is something we’re familiar with, so we figured, even if it’s just a few meals, we could try to make a difference.”

Viramontes has seen a ripple effect, with many customers jumping on board to help out the economically challenged and medical professionals who have to work around the clock. It all traces back to Viramontes’ line about community; the food served at Global Café has brightened many a day for Memphis diners, and that appreciation has allowed the chefs at Global Café to turn into philanthropic assets to the community in uncertain times. And with Langer not touching a single cent of the restaurant’s profits, the food hall can continue to be creative with recipes and do good work in Memphis.

But that sense of collective remains inside the restaurant, as well. “We are not an incubator,” explains Viramontes. “We do not put our people out. If the chefs want to make this a retirement job, those chefs can stay as long as they want. If in 10 years or 20 years, if any one of them wants to move on with their life for whatever reason or ever reaches a point where they’re ready to open up their own restaurant, I will help them personally get it open, and then we will bring in somebody else to Global Café.”

Need somewhere to start when sampling Global Café’s international cuisine? While every dish is delicious and representative of its origin, here are three to get lunch or dinner rolling. 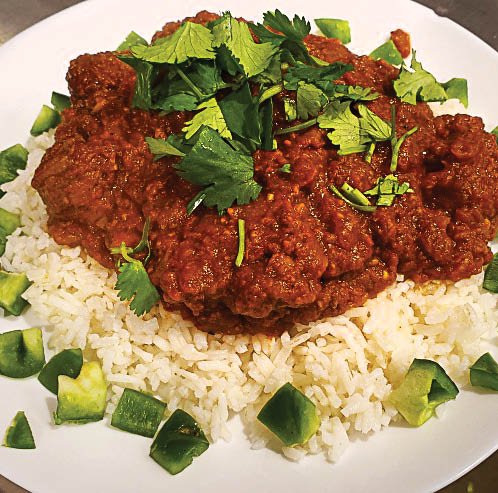 Take the spice levels up a notch with Chef Ibti’s Dama with Rous. The dish places slow-cooked beef tender over a bed of rice, with the meat marinated in a wild jalapeño and tomato sauce. The use of extra fresh jalapeños gives the dish an extra kick, while the garnishes of red and green bell pepper provide a crisp foil to the spice. 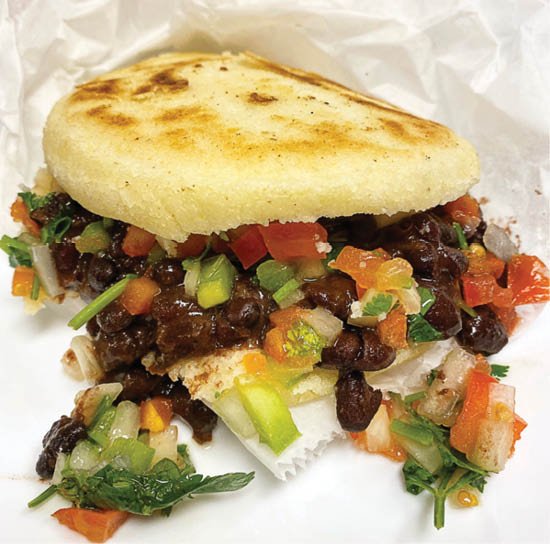 Originating in the northern region of South America, the Arepa is a staple of Venezuelan cuisine. The flat, doughy patty comes stuffed full to bursting with beans, cheese, and your choice of either pulled beef or chicken. Chef Maria can also whip up a vegan variation. 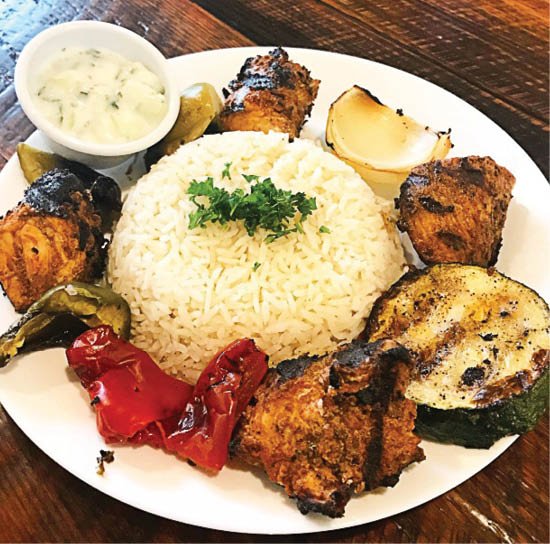 The grilled chicken kobab is as reliable as they come: a filling, yet very healthy dish accompanied with vegetables, rice, and Tzatziki sauce. And the best part? You’ll find no fat on this kobab; Chef Fayha’s approach to the grill transforms the dish into 100 percent protein to round out this flavorful meal.

Food: A delicious variety of international cuisines to satisfy any palate. The differing styles offer something for everyone, all at an affordable price.

Alcohol: Viramontes’ colorful assortment of cocktails pairs well with any of the restaurant’s entrées. The bar also offers wine, domestic and imported beer bottles, and local brews on tap (watch out for 99-cent specials on select Wiseacre and Crosstown beers).

Extras: There are enough items on the menu to keep any diner occupied, but the appetizers and desserts can both stand on their own. The empanadas (chicken, beef, cheese & potatoes, or vegan) are a fantastic opener, and you can’t go wrong with a sweet walnut baklava to close things out.

What’s next: New items, like Juan’s Asado Bowl, keep things fresh on the menu. Keep an eye out to see what other specials the Global Café team comes up with going forward.