Ice Cream That’s ‘Out of This World’

When Karin and Steve Cubbage opened Area 51, an artisan ice cream shop in Hernando, Mississippi, in the summer of 2014 they had no idea where it would take them.

Less than four years later, they’ve opened a second location in the Crosstown Concourse in Memphis and are expanding to a larger off-site kitchen in Hernando to provide product to both stores and possibly more wholesale accounts.

The journey began when Steve was downsized from his casino marketing job, which brought the family to North Mississippi less than a year before. They planned to move back home to Kansas City, but their children loved it and wanted to stay, so the couple took a leap of faith, turned down a solid offer on their house and began to brainstorm about opening a business. 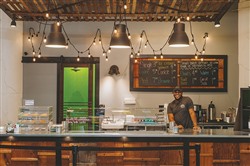 Brent Logan is an employee at Area 51 Ice Cream in Crosstown Concourse. The company’s first location is just off U.S. 51 in Hernando, Mississippi, and it recently opened a larger commercial kitchen, which may increase its wholesale business. (Daily News/Houston Cofield)

Karin had grown up watching her father make ice cream and she had always worked in restaurants, watching the chefs’ techniques and learning how to combine foods. She had a particular penchant for sweets, so that’s mostly what she made, and she thought she could turn her talent into a job. The couple wanted to sell something they knew was good and that people would wait for.

“I thought people will wait in line for ice cream,” Karin Cubbage said. “It was also about control. I wanted to know exactly what the customer was going to have. You can try before you buy.”

Their philosophy for Area 51 from the beginning was to locally source every ingredient they could. Hernando has an award-winning farmers’ market steps from their shop, so they had made the rounds and made connections with farmers.

“We really utilized the farmers’ market,” she said. “Even if we couldn’t buy it there, they helped us find someone who grew or sold what we needed.”

The name of the business is just a coincidence.

“In two minutes Steve came up with Area 51, and I said fine,” Karin said. “I was thinking ‘Out of This World’ and he watches all those conspiracy theory shows.”

They only realized the significance when a neighbor asked about the name being related to their location near state Highway 51. 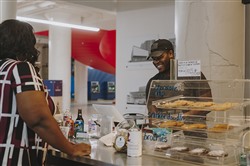 Their initial investment was savings and maxing out credit cards, but they were profitable from day one, she said. Area 51 has seen consistent sales growth of 20 to 25 percent each year.

Area 51 features 12 flavors a day, all made fresh daily, and the offerings rotate according to what ingredients are in season.

There are a few regular flavors like Dutch chocolate, vanilla, mint chocolate chip and Saigon cinnamon snickerdoodle and a daily sorbet, but rotating seasonal favorites like blackberry goat cheese and blood orange sorbet are only available in season, and they keep customers coming back.

“I’ve just made things I’ve wanted to eat, and so far so good,” Karin said. Steve handles everything except the cooking, and his corporate marketing background has been really helpful, Karin said.

For the first two years, all Area 51 ice cream was made with a two gallon table-top ice cream maker. Now with a big-batch freezer that makes six to seven gallons at a time, Karin makes 12 gallons of ice cream and makes fresh baked goods daily for both stores. The new 900-square-foot off-site kitchen will increase capacity and allow the business to grow.

Almost immediately after opening, the Cubbages started getting requests for franchising, which Karin says is not in the cards for Area 51.

“If we were going to expand we wanted to do it ourselves,” she said. “That’s part of our success I think, that we’re here.”

The Cubbages had seen Kansas City go from struggling to flourishing after some strategic investments and rebuilds in that city’s core, and they saw Crosstown Concourse as a similar project, one that could turn the tide in Memphis, and they wanted to be part of it.

Amy Carkuff, one of the original development team members for Crosstown Concourse, said the team had been looking for an ice cream vendor that fit the local small-business vibe that the project was promoting.

“We could not have hit it out of the park better than with Area 51,” she said. “The ice cream is so good and creative, and combined with the people who run it who are artistic with a good business background … it’s perfect for a place like Crosstown.”

Karin’s sister is an interior architect, and they flew her up to handle all of the details for the Crosstown store. The Crosstown developers made many salvaged items available for tenants to use in their build-outs, and Area 51 took advantage using an old sliding door and salvaged wood in the design as a nod to the original Sears building that was there before.

Future growth for Area 51 will most likely be in mail order, which requires significant scalability that the Cubbages are researching. Area 51 has one wholesale account at Avenue Coffee near the University of Memphis, and they’ve been approached by some of their Crosstown Concourse neighbors with cross-marketing business opportunities.