Richard Spore and his colleague at the Memphis office of the Bass Berry & Sims law firm have worked on several ambitious, game-changing projects like the transformation of Overton Square and Bass Pro Shops’ redevelopment of The Pyramid.

So they’re used to complicated real estate and financing transactions.

But when leaders of the $200 million effort to redevelop the long-vacant Sears Crosstown building approached Spore and his partner Gil Uhlhorn about turning the hulking eyesore into a “vibrant, vertical urban village” with a broad mix of tenants and financing streams, the veteran attorney – a skeptic by trade – admits people had doubts. 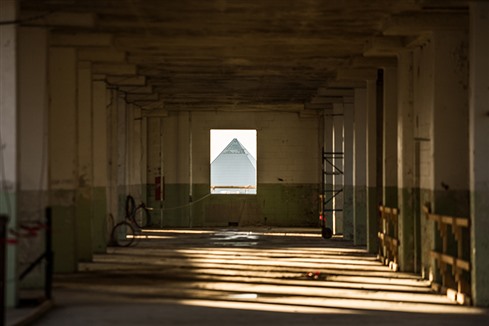 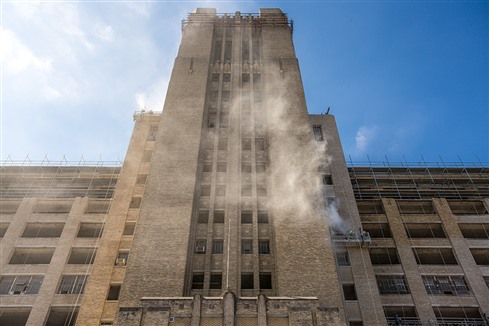 The Pyramid, where another of Memphis’ massive renewal projects is underway, is visible down long corridors of the bare-bones Sears Crosstown building. (Memphis News/Andrew J. Breig)

“It’s a testimony to the vision and passion of the people behind the project that it got done,” he said. “If it had not been for people going to bed at night thinking about it, waking up thinking about it and thinking about for the many hours in between, it would not have gotten done.”

Today, the giant, 1.5 million-square-foot structure is covered in construction scaffolding and buzzing with activity as general contractor Grinder, Taber & Grinder oversees dozens of crew members working to prepare the building for its second act.

Projected to open in 2017, the project will create 800 new jobs and generate more than $37 million in new wages annually, according to an economic impact analysis requested by the city of Memphis.

A community groundbreaking ceremony is slated for Feb. 21 – 88 years to the day after the initial groundbreaking in 1927 – when the development team will unveil a new name for the project.

But it took years of hard work, a vision shared by the development team and community-minded anchor tenants called “Founding Partners,” a complicated financing package that resembled a jigsaw puzzle where one missing piece could doom the effort, and a little luck to get to this point.

“On a massive project like this there are more red lights than green ones,” said Memphis Mayor A.C. Wharton Jr. “This is why Sears Crosstown is not only ‘Exhibit A’ for rebuilding the core of our city, but also a model for how to creatively overcome obstacles to do it.”

Sears Crosstown, used by several generations of Mid-Southerners, was a towering urban blemish for years after Sears closed the retail store in 1983 and shuttered the distribution center a decade later, leaving an empty shell hovering over the Midtown neighborhood.

Over the years several teams had shown interest in the behemoth, but several factors presented daunting roadblocks:

• The sheer size of the building – at 1.5 million square feet the Crosstown building is the equivalent of three Clark Towers;

• The money it would take to finance the redevelopment;

• The effort it would require to lease the space.

Those obstacles proved too difficult for those teams to overcome.

But in late 2009, Todd Richardson, an associate professor of art history at the University of Memphis, was working on an artist residency program when he first entertained the possibility of redeveloping the Crosstown property.

Richardson knew Staley Cates – the president and chief investment officer of Southeastern Asset Management Inc. – who, along with his wife Elizabeth, bought the property in 2007 and donated it to Crosstown Building Owner LLC.

“We basically started saying ‘wouldn’t it be cool if?’” Richardson said.

As could be expected with a project of this nature, Richardson said there were plenty of skeptics, but the audacity of the plan actually made people willing to entertain the notion.

“People were telling us not to waste our time and to tear it down and on and on, but the reality is it’s a massive building in the middle of our city that is incredibly located, it’s got this great history, iconic status, beautiful Art Deco design and we decided we’ve got to take a crack at it or it’s going to be torn down.”

The feasibility study, conducted between May 2010 and May 2011, found there were no insurmountable structural or environmental problems that would prohibit redevelopment. Built mainly of brick and concrete, the building – which also served as a nuclear fallout shelter – was as sturdy as they come and did not contain an overwhelming amount of asbestos, a major plus.

With no glaring structural or environmental road blocks, Richardson and a small team of believers went to work.

To redevelop the building, the team knew early on that they would need community-focused tenants that would realize they could accomplish more together than apart, that in the end the whole would be greater than the sum of the parts.

“At the end of the feasibility study the team decided we weren’t going to look at that building as just a space to be filled,” Richardson said. “We are going to look at it as an opportunity to create a whole new neighborhood anchored in the three biggest assets our city has, which are art, education and healthcare.” 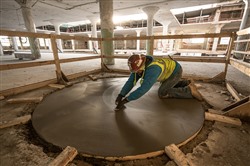 McLean Wilson, co-leader of the team, said the project and the tenants needed to reflect Memphis.

“It was taking stock of what our city is made of, what we excel in, and pursuing that as opposed to just leasing it up to anyone, and that at its heart is why this building is different from any other building in Memphis and any other Sears building across the country,” Wilson said. “It’s not just a building and a real estate project for which to fill space, it is an opportunity to create a neighborhood.”

That vision made it possible for organizations like the Church Health Center, Methodist Bonheur Healthcare, Christian Brothers University, St. Jude Children’s Research Hospital and ALSAC, among others, to buy in and see past any lingering fog of doubt.

“Because of what we were trying to do the organizations we were talking to were able to see how they could be better together,” Richardson said. “They each have their own individual missions and visions and right now they kind of operate in silos, but if they’re together then there are things they could do well or better that they couldn’t do before or do as well before.”

With anchor tenants onboard, Wilson was tasked with finding financing for the project, the largest question still hovering around the effort.

“I don’t think anyone doubted an architect could draw a great plan for it or that a general contractor with good plans could do something with it, people doubted whether we could get the financial structure to support something of that size in our city,” Wilson said.” I think up until we closed (financing on financing Dec. 29, 2014) there were plenty of people who still didn’t think it would happen.”

In late December, the team secured a senior loan of $80.5 million from SunTrust Bank, the largest single financing source in the $200 million project. All together, the project included 21 different funding sources – public, private, and philanthropic – to preserve and redevelop the historic building, 1,150-car parking garage and the surrounding 19-acre site.

Over the last 10 years, Joel Superfon and his partners at Phoenix-based Dudley Ventures have specialized in large tax-credit supported projects, including the use of the New Market Tax Credit program, which provides tax credit incentives to investors for equity investments in certified Community Development Entities, which invest in low-income communities.

“I think it’s such a massive project when people saw it on paper I think a lot of them thought, ‘How could this be done?’” Superfon said. “This was truly one of the most remarkable transactions we’ve been involved in on the New Market Tax Credit side.”

Rachel Diller, managing director of the urban investment group at Goldman Sachs, said the Crosstown project’s ability to meet the needs of stakeholders and tenants while having a positive impact on the surrounding neighborhood stood out.

Launched in 2001, the urban investment group specializes in providing capital in underserved communities across the country, committing $3.5 billion to preserve and create housing, community facilities and commercial and retail space.

Crosstown turned out to be in the unit’s wheelhouse. Once complete, 3,000 people are expected to stream through the building’s doors each day. The mixed-use redevelopment will include restaurants and retail, a small grocery, a fitness center and health clinics, a charter high school, a contemporary art center, commercial offices and 265 loft-style apartments.

“It is my favorite project of 2014,” Diller said. “I can already see the vision coming to fruition.”

The key for Goldman Sachs, which invested $35 million in the project, and other investors was the involvement of the “Founding Partner” tenants who bought into the vision.

“The difference between the dream and the reality was those founding partners,” Diller said. “They took it from a dream to a reality and we don’t see that everywhere.”

During a recent meeting in a converted basement at the Crosstown Arts building across the street from the Crosstown site, Wilson and Richardson, surrounded by Crosstown signs saved from the ash heap of history, reflected on the project.

“I think it’s a project that has and will provide hope,” Wilson said.